On Sunday night, the New England Patriots beat the Atlanta Falcons in an unforgettable game that featured a ridiculous comeback, the first overtime in Super Bowl history, and more plotlines than the latest George R. R. Martin creation.

However, one such storyline has caught the eye of the sporting world in the past 24 hours: after the game, Patriots QB and current Ugg model, Tom Brady appears to have had his jersey from the game stolen. 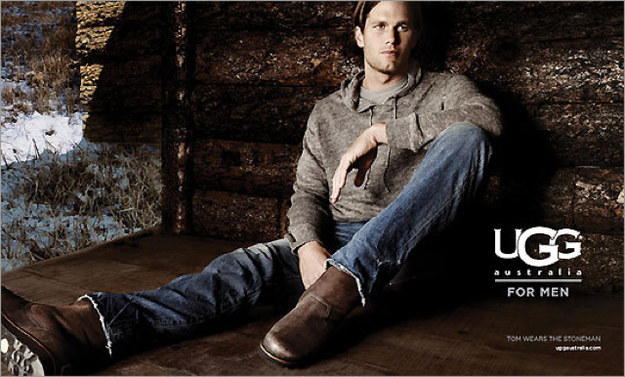 This jersey, which has almost immediately become one of the most iconic uniforms in NFL history, would be worth a fortune on the black market.  The internet has been abuzz with the news that there was potential Grand Theft Brady and we here at No Coast Bias decided to put on our monocles, grab our sleuthing hats, and dive into the mystery.

Here’s a list of the most likely suspects in the Brady Jersey Heist.

The esteemed Vice President was seen last night seated in the skybox of Houston Texans owner, Bob McNair. He could be seen hobnobbing with the rich, the famous, the white, and the hetero. In other words, it was business as usual for Mike Pence. But why was he really there? Shouldn’t he have been back in Washington D.C. helping Steve Bannon shadow-run the entire country? Surely, he wasn’t just there to lean over to his colleagues and say, “That’s not true, by the way…” about every lyric in Lady Gaga’s halftime show. Surely he wasn’t just there to have a panic attack when he saw so many guys touching other guys in the butt area.

"There! There, did you see that? That man down there smacked that other man's butt!" – a suddenly SUPER concerned Mike Pence. #SuperBowl pic.twitter.com/cVxmS9I7G1

So what was he doing there, really? Here’s the cold, hard, strangely-white-haired truth: he was there on a secret mission from Donald Trump. Trump, one of the world’s most infamous jersey-chasers, has long been desperate to align himself with the New England Patriots organization in any way, shape, form, or Tweet. They have, tellingly enough, not denied his amorous overtures. Did they finally drive the love-sick Donald right off the cliff, knowing that he needed to send in his right hand man (*Author’s note: using someone else for the role of anything related to “hands” is likely a necessity given what we know about certain sizes of certain appendages.)

I know what you’re thinking. Dude, it took him, like, 11 minutes to get wheelchaired 50-yards for the ceremonial coin toss. He’s definitely innocent. 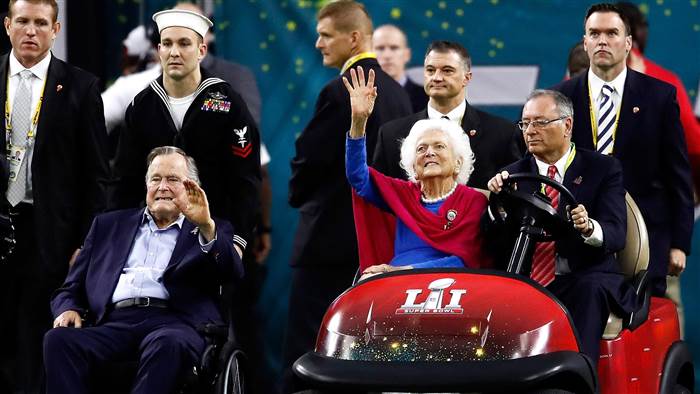 But, if history tells us anything about the greatest criminal masterminds in the world, it’s that they are masters of disguise and in hiding in plain sight. How do we know that, as soon as that wheelchair got off the turf, H.W. didn’t start slowly walking more erect, straightening his posture — his strides coming more rhythmically. Suddenly, he’s striding down, with no security to stop him, through some of the most guarded halls in all of sports. Somewhere in the Patriots’ locker room, Tom Brady’s special, lemon-water-weirdo-concoction slips from his fingers and crashes on the floor. It shatters everywhere. On the bottom of the glass, it says, “George H.W. Bush”.

Also, let me show you this clip of Lazlo Soot from this compelling documentary called Smokin’ Aces.

It almost makes too much sense, right? This night, typically one reserved for the commissioner to bask in the spotlight and bathe in the piles of cash he just raked in for the league, has been tainted harder than a frat-boy teabagging a passed out Bro. His night has been sullied by a town full of dudes named “Sully.” And we know Goodell can hold a grudge. Hell, he practically watched this entire season with the same look on his face as the girl from The Grudge. What’s the last-ditch, crash-landed, game-freakin’-over move for a dude that is absolutely, 100% about to get put into checkmate in front of 50 Million viewers? He goes petty. Swings below the belt. Think about it: what did Tyson do when he knew Holyfield had him beaten? Did he take his whooping like a man, or did he fight dirty? This is Goodell swinging below the belt. He pulled some strings, called in some favors, and probably took a few of his henchmen off of their usual beat (*Author’s note: shaking down doctor’s who believe in things called “concussions”) and hijacked the jersey to end all jerseys.

They have a history of trying to ruin things that America loves. Democracy. Freedom of speech. Apollo Creed. We know that they openly strong-arm jacked Bob Kraft’s Super Bowl ring a few years ago, and we know that they have become increasingly emboldened due to a certain White House becoming decidedly orange. And, who knows, maybe Putin finally needed a shirt. Marky Mark, noted Patriots super-fan, was unmistakably — and suspiciously — absent from the most harrowing, brilliant finish in Patriots team history. According to his Instagram account, Wahlberg ducked out of the stadium in order to tend to his youngest son’s impending illness. But, if we know anything about Wahlberg, it’s that he’s a man of action.

I had to leave the game early because my youngest son wasn't feeling well. Trust me, I would have loved to be at the stadium — but family first. Doesn't mean I don't love my Patriots too! ❤

Now, we know with certainty that he would he have single-handedly stopped 9/11 from occurring, but what’s to say that he wasn’t spending the last few moments of the game disguising himself as a pile of dirty laundry, only so he could jump out and score a sweet game-worn jersey from his idol? Wahlberg spend most of his movies either running from things that are exploding, lifting weights, or doing some combination of both, so it wouldn’t be too much of a stretch to imagine him blending in as one of the Patriots’ 10,000 short, white, buff WRs before slipping out with Tom’s jersey.

Johnny Football has fallen on hard times. This much is clear. Whether it’s photos of him sitting at a bar at 11 AM, housing shots of bottom-shelf Tequila by himself, or whether he’s out inexplicably still having enough money to get into clubs with bottle service so he can house bottom shelf tequila shots with some girls, Johnny Football’s downward spiral is tighter than a deep ball from Brady himself. However, if there’s one thing that we know about Johnny, it’s that the dude knows how to sell football merch. It got him busted at Texas A&M, it’s kept his Lohan-esque lifestyle afloat, and it’s probably why they found him outside NRG stadium in Houston this past week, hawking signatures for $50 bucks (*Allegedly). Why wouldn’t a notorious sports memorabilia salesman be looking to get his hands on a game-worn, greatest-comeback-ever, Tom Brady jersey. I mean, that’s the great white whale for anyone looking to fund a great white cocaine habit.  Did he slip into his full-on incognito persona, Billy Manziel, and try to slip in for the theft of the century?

So was it Professor Pence in the Skybox with the Trump? Or was it Mr. Manziel in the live-in van in the NRG Parking lot where he’s sleeping like it’s Burning Man?  Was it President Putin in the Kremlin with his hands marionetting the Donald? Or was it someone else?  Let me know who you think did it.