Welcome to The Ocho: your source for sports, pop culture and (lame) humor. Each week, we give you the best in each of eight (or “Ocho” as the Germans say) categories. You’ll figure it out as you go along. (And when you do, please explain it to us.) So kick back, relax, enjoy. We’ll wake you when its over. 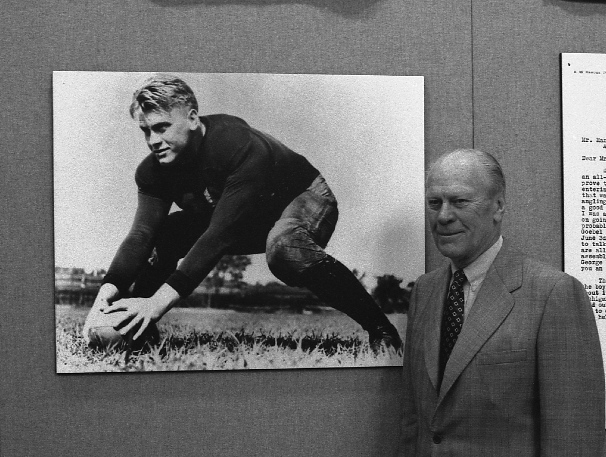 When I was in seventh grade, Pat McCarville, Adam Jacobs and myself were huge fans of Saturday Night Live. It was pretty much all we talked about outside of sports and girls. This was inspired by the new primetime program The Dana Carvey Show. We would always make up skits and do impressions. (I even did Harry Caray interviewing one of our teachers for a skit competition.) We dove head first into this obsession with  sketch comedy in the pre YouTube/pre-internet era and watched every classic episode we could find on Comedy Central, taping them when we couldn’t watch. (For the younger readers, taping was the precursor to DVR.)

One sketch that stood out to me was Chevy Chase (for the youngsters, this is the old guy on Community) as Gerald Ford (for you youngsters, this is not the guy they named the Lions field after). Ford was probably our most athletic president, yet was satired weekly by Chase after falling down the stairs of Air Force One.

So what I’m saying is that: yes, I was an athlete at a high level; yes, I’m from Nebraska and yes, I injured myself falling down the stairs, causing the delay of last week’s The Fantasy Experiment.

The Love of My Week

Lyn-Z Adams Hawkins Pastrana (aside from having a cool first name and a billion surnames) is the super cool wife of the super cool Travis Pastrana. She’s a multiple time X-Games champion and daredevil in her own right. This week, she won a charity car race at the Charlotte Motor Speedway for NASCAR WaGs. It’s one thing to have a charity softball game for baseball WaGs or a charity flag football game for NFL WaGs, but this is pretty extreme. And it’s not her first time doing it either. She’s been in three races total, including a restrictor plate race. By the way, one of the women flipper her car!

The only other woman I can think of that daredevilish is my fiancee The Ballerina (me avoiding the frying pan for the second-consecutive week), who has scars from many different athletic achievements which includes using a brick wall as a balance beam.

And kudos to Mr. Pastrana for the way he proposed. And the post-game interview.

The Alpha Dog of the Week

Alex Rodriguez hasn’t hit .300 in a playoff series since the 2009 ALCS and has only hit .300 six times in his 18 playoff series. His numbers in the playoffs this year were so abysmal that Joe Girardi took the five-time home run champ out in the bottom of the ninth inning of ALDS Game 3 with the Yankees down one run to Baltimore. Enter Raul Ibañez, another former Mariner, even older than A-Rod. Game-tying home run in the ninth and game-winning home run in the 12th.  That set a bunch of records. Then he came back in the bottom of the ninth of Game 1 against the Tigers, becoming the first player ever to hit three home runs in the ninth inning or later in a single postseason.

Alex Rodriguez was finally able to get a hit in a late inning Sunday night. The logical explanation is that Girardi told him it was April.

Video of the Week

After the strange safe call during Game 2 of the Tigers-Yankees ALCS, I couldn’t help but think that someone had switched the officials. Then I stumbled upon some footage Major League Baseball didn’t want us to see.

The Number of the Week

As in the number of Big East teams in the BCS top 25. That’s three more than the Big Ten and one more than the ACC. And if you factor in two teams that were supposed to be in the Big East this year (West Virginia and TCU), that’s five for the worst conference in the NCAA.

Wild Card of the Week

I really have no idea what was going on Sunday in the Bay Area. Somehow San Francisco was playing the Giants … and lost. But even more disturbing was Game 1 of the NLCS when they gave us some crazy rendition of the Star Spangled Banner. I understand Jose Feliciano’s rendition is famous and has been performed at many sporting events, but did he remix the original? For the love of Nancy Pelosi, what have they done to our national anthem?

The Completely Unsubstantiated Rumor of the Week

Finally … The Goon has Come Back …

I called it last week! People thought I was joking when I said Roger Goodell would come out with penalties against the Saints. And he certainly did.

That’s why you shouldn’t laugh when I tell you this week that Vince McMahon and Donald Trump are in talks to start a rival hockey league in North America.

Shazam of the Week

There were a lot of great candidates on my Shazam list this week, but in the span of three songs, I got a pair from Risky Business.

The first was more for the iconic video that guys have emulated every time we’ve had socks on a wood floor.

But the winner has to be the song that pumps up every guy every time they hear it. You cannot help but burst into the air drums when it hits. It’s pretty much in the male DNA. It’s so big in sports that the Ravens use it every pre-game, and NFL Films did a piece on it a few years ago. So here is the iconic athlete version of Phil Collins’ “In the Air Tonight.”