We now have to begin the nation-wide rehabilitation process to regain our legal sanity. No longer will your boss let you plead “no contest by way of busted bracket” when he stops by to ask you for the third time for a spreadsheet that you can only vaguely recall ever existing; maybe somewhere in there, tucked amongst the blanketed goodness of buzzer beaters from half court and roundball-induced heart palpitations, you can sort of recall something about quarterly earnings?

Make no mistake: last night was the ultimate in “I hate to see you go, but I love to watch you walk away” sports moments. It was a game that invites so much hyperbole that it’s difficult to quantify exactly how incredible it was. Each single thread of the entire Madness experience (*Author’s note: a registered trademark of the blahblahblah, fineprintfineprintfineprint) was pulled together into the tightest, most magnetically enjoyable bow that I can remember. It was a tapestry with so many interwoven story lines that it is easy to forget just how forgettable some of the mid-round games were.

What book-ended those relatively mundane games that saw blowouts and snoozers was something truly special. As usual, there was no shortage of pandemonium during the most unpredictable sporting event that exists in a time where statistical analysis and experts routinely roll snake eyes on their own attempts to figure out exactly what in the hell might happen. I’ll try to avoid some of the more obvious moments that you were surely inundated with, although some will be entirely unavoidable, and so here are my favorite moments from the 2016 NCAA Tournament.

The first round was a bracket-obliterating, delectable cocktail that burned so good on the way down. It was moonshine for the sports fan’s soul.

Hawaii’s Upset of Cal, While Wearing those Dope Green and Black Uniforms 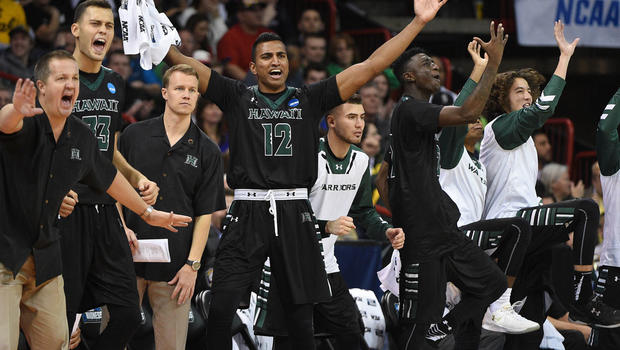 The Rainbow Warriors just exude cool to me.  First off, they’re from a place that brought us surfing and Dog the Bounty Hunter and secondly, they somehow manage to stay focused on playing an indoor sport in a place where there’s a pristine, stunning beach within walking distance?  How could you not love them taking it to a super-talented, but strangely under-achieving Cal team?

And, no, this isn’t an ode to Iowa.  I can’t stand the Hawkeyes.  The only thing that I loved about this game was one more game for Fran McCaffery to get to a podium and show the world that his face looks exactly like a human thumb with glasses and hair.

Breakout star Buddy Hield dropped approximately 25 per game in the tournament and had one particularly absurd moment where he scored 19 points in 8 minutes that had people from Portland, Oregon to Portland, Maine staring at their TVs like they just accidentally watched the death-inducing snuff-film from The Ring. It was fantastic and crazy, and my favorite individual performance of the tourney.

THIS IS MARCH! #MARCHMADNESS https://t.co/0P2NOYpVj6

I was standing out in the backyard, streaming this game while my son played on his swingset and mentally lashing myself for somehow thinking that Purdue was an elite team (*Author’s note: likely because they have, what, 45 guys over 6’10” on their roster?), when this shot happened.  My initial instincts: to scream like a dying vampire that’s just caught a CGI-stake through the heart, and fire into an expletive laced rant had to be tamped down.  My son.  I couldn’t say exactly what I wanted to say, so I did what most parents do.  Invented words, chopped up my speech pattern like an edited-for-tv version of Goodfellas, leaving out entire words like a really bad T-Mobile phone connection in 2004 right before the call drops.  Regardless.  It was beautiful and terrible all at once.  I loved it, even though I later tweeted this.

Like this one from the Notre Dame VS Stephen F. Austin game.  It looks for all the world like a group of people attempting to reenact the scene from when Lee Harvey Oswald was shot by Jack Ruby.  Only, it’s a group of college kids who’ve just seen a sick dunk by a teammate.

Or this one.  Which seems to me to be what would happen if a group of dudes were attempting an interpretive dance to show what the birth of a child was like.  Look at their faces.  Jubilant, stank-faced, and then one guy apparently rising from the grave like a zombie extra in The Night of the Living Dead.

As the based Gonzo God, Hunter S. Thompson, once wrote:

“Buy the ticket, take the ride…and if it occasionally gets a little heavier than what you had in mind, well…maybe chalk it off to forced conscious expansion: Tune in, freak out, get beaten.”

This quote pretty much summarizes the manic pendulum swing that Northern Iowa experienced in the course of a few short days this march.  Northern Iowa bought the ticket, rode the hell out of their own personal, rickety, wooden-carnival ride, and when they got off: the pretty much puked on their own shoes. But you better believe I would trade my team’s experience (*Author’s note: watching on a pleather couch somewhere) for what UNI had happen.

Duke Made it to the Sweet Sixteen Again. Which Allowed all of us weirdos to pontificate about the possible connection between Grayson Allen and his erstwhile daddy, Ted Cruz.

Long story short, the above chart demonstrates my assertions that Allen was created in a cybernetic lab in Orlando back in the mid-90’s by Ted Cruz, Coach K, and the Freemasons. Go here for the details.

Sean Miller Was Sweatin’ to the Tourney

Sean Miller is known for having a fiery sideline demeanor and a gigantic paycheck.  His Arizona Wildcats are routinely near the top of the Pac-12 and he appears to be carrying the torch that Lute Olson passed to him, but what he will now be known for: looking like that torch was so hot it caused every pore in his upper torso to spasm into a volcanic eruption of sweat.  Not since the above pictured Richard Milhous Nixon has a country become so intrigued with one man’s over-worked glands as when Miller came out pouring buckets of sweat into his apparently ill-ventilated dress shirt against Wichita State in the first round.

My favorite comparison that I could come up with was how much Miller looked like a super-hammered groomsman at an outdoor wedding reception in August.

Of course there are probably a million different things that were bizarre that I completely loved.  And this isn’t even involving me discussing the best Title game that I can recall ever seeing nor does it involve me attempting to explain how amazing this Chuck Barkley reaction shot is after Villanova won the title during a fantastically entertaining finale to the Tourney.

What’d I miss, the readers? Chime in and let me know what YOUR favorite part of the tournament was this year.  Let’s get weird.