It’s never been cooler to slap feet to pavement and selfie your way through 5,000 meters of strobe lights, barbed wire and unemployed dudes throwing handfuls of colored corn starch all over you for $5/hour.  And it feels like these kinds of runs/challenges/social-events-masked-as-physical-fitness-and-a-chance-to-wear-a-tutu are peaking right now.

That being said, I decided it was time to strike while the iron is hot.  Ladies and gentleman, may I introduce to you: the inaugural Jameis Winston 5K!

The Start of the Race

The start of the JW5K will be an exercise in pure revelry. Featuring live music by these guys:

who will be singing a live rendition of Broadway’s The Little Mermaid and only pausing in their song and dance numbers for periodic breaks in character to allow Sebastian to point at all the runners and shout, “Stop! THIEF!!” to really give them the impression that they’re getting the entirety of the Jameis Winston experience.

The special guest starter will be Florida State Ballboy and internet sensation, Red Lightning.  He will shoot a bee-bee gun into the air while mean-mugging everyone and looking a lot like a human version of Sebastian from The Little Mermaid.

At the 800 meter mark, runners will be greeted by a team of 30 flown-in Florida State University police officers who will wildly cheer and recklessly high-five anyone wearing a Jameis jersey while simultaneously making sure to turn a stupifyingly blind eye to any and all infractions, cheating, or criminal acts that occur during the race.

Approximately 6 meters later, the FSU PD will halt the race to perform a detail-oriented, thorough investigation of any and all allegations of impropriety that have been made during the first half mile of the race.

Just kidding.  The FSU PD will promptly abandon the investigation to resume their carousing and high-fiving with all Winston-wearers and they will begin resumption of their regular duties.  Chiefly: stumblefucking around and performing such poor police work that they make the officers of Brooklyn Nine Nine look like Sherlock Holmes.

All runners will be treated to roughly 100 meters of full-length mirrors alongside the course.  Each runner is required to make the below-pictured face a minimum of four times during this section of the course.

At the 1 mile mark of the race, the course will wind through a make-shift cemetery where every tombstone will read: RIP, Jimbo Fisher’s Hairline.

At the 2,000 meter mark, the race will enter the front doors of the area Publix store. Each contestant will be required to enter the front doors, grab a handful of delicious, juicy, tender crab meat and then haul ass out of the store. Any competitor caught paying for the meat or, indeed, exercising good judgment in any way will be subject to immediate disqualification. 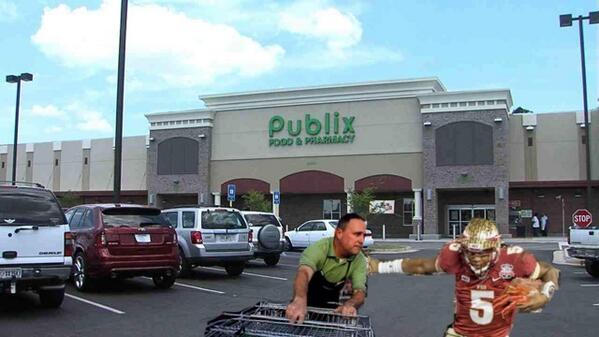 At the 3,000 Meter mark, competitors will be treated to yet another live musical act, this time featuring the hit band: Stan Wilcox and the Blind Eyes.  Covering hits that range from Stevie Wonder to Ray Charles this band will only do songs either by blind guys or about being blind.  Their up-tempo musicality and cunning lyricism has earned them rave reviews from Jimbo Fischer and Jimbo Fischer.

With only 1,000 meters to go, the runners will have to navigate a perilous web of media attention and 800 meters of microphones without saying anything sexist, dumb, or offensive.  Good luck with that.

Each runner will leap onto a table to cross the finish line where they will deliver Jameis’ signature line, screaming as loudly as their exhausted lungs can endure to “F- her right in the Pu**y!”

So. . .who wants to pay $50 bucks, get themselves a really sweet T-Shirt and go on a run for the ages? Let’s kickstart this bad boy and start the latest and hottest trend in fun-running.