Pointillism /ˈpɔɪntᵻlɪzəm/ is a technique of painting in which small, distinct dots of color are applied in patterns to form an image

On Saturday Tommy Armstrong trotted out onto the torn-up, depleted, bombed out grass of Northwestern’s Ryan Field and took a knee to secure a big-time win for the Nebraska Cornhuskers.  He knelt down, ball in hand, raucous invading horde of Husker fans whooping into the night air, howling at the man-made moons hovering above the stadium.

It may not have been flawless, but it got the job the done.

The game itself, the delivery of the ends to a hard-fought game, weren’t perfect, but it more than justified the means.

Before the game, Michael Rose-Ivey, Mohamed Barry, and DaiShon Neal knelt down on the same field for a different reason.  Three young men, looking to combat and raise awareness of an ancient and age-old problem that has plagued our nation.

It wasn’t flawless.  But it got the job done.

The delivery itself, of bending down in an effort to raise up, may not have been what I wanted or what was comfortable for many of us.  But it isn’t about the means.  It’s about the ends.  Or, at the very least, it’s about the journey to try to get there.

It’s about the dream to end racial injustice and incendiary hatred, about vitriol and the attempted slaying of this unwieldy, fire-breathing monster that we created some hundreds of years ago and that has lived on in our nation’s blood stream like some kind of virus that we just can’t seem to shake.

When I was in the midst of barely-passing my art history class at Wichita State University (*Author’s note: I believe that I got a “C+” which, believe it or not, at that time was better than I thought I was going to do.) one of the things that I recall learning was a brief time we spent discussing the art of pointillism.

Popularized by Georges Seurat it was a pain-staking, nuanced, piece-by-bloody-piece creation of art.  He would literally take a brush, dab it in paint and use the tip of that tiny, hair-follicled brush to create something vast and expansive.  You’ve probably seen his most famous work before: 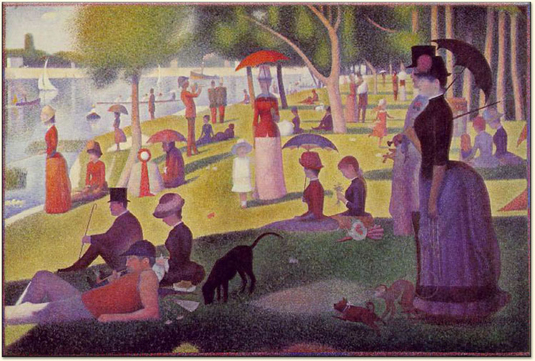 I remember even then, through a haze of cheap beers and long nights spent watching VH1 reality dating shows, being completely mystified at the how and the why of this particular piece.

Think how long this must’ve taken to create in this particular way.  Why, I often thought, would anyone take something and delve this deeply into process when they could merely have painted normally.

As I have aged I have come to realize more and more why Georges Seurat did what he did.  Painting with a broad brush is easier.  It’s faster.  It doesn’t require as much discipline, nuance or attention to detail.  It’s so much simpler.  It’s less complex; less maddening.

But it doesn’t allow you to understand as well.  It doesn’t give you control over your work, over your art, or over the world that you are a part of as much as delving deeply into what is there.

You don’t agree with the means?  Fine.

Do you agree with the ends?  For the sake of our nation’s future, I pray that you do.

Either way, remember this: when you try to paint the three young men who knelt that night at Ryan field, you damn sure better make sure you use pointillism and not some ham-fisted, hack, can of spray paint.

We have a chance to make art.  What’s it going to be, Nebraska fans?