In 2016, HBO launched its newest big property to stand alongside the television powerhouses like Game of Thrones and Veep. The series, created by Lisa Joy and Jonathan Nolan and adapted from the 1973 film by Michael Crichton, tells the story of a cowboy-themed amusement park populated by robotic hosts, who eventually begin to become sentient. With the second season of Westworld nearly here, now is as good a time as any to look back at the critically-adored and immensely popular first season and a near-perfect season finale. To understand what made the Season 1 finale so excellent, we need to examine how the characters find themselves at the end of the finale.

This post will discuss the ending of the first season of Westworld. Somewhat obviously, it contains spoilers.

Dolores’ journey throughout the first season is her progression from a passive character to an active one. As she puts it, she “imagine[s] a story where [she] didn’t have to be the damsel.” The last thing Dolores does in the Season 1 finale is to attack the shareholder party, likely killing various Westworld executives.

Earlier in this episode, Dolores says to the Man in Black: “One day, you will perish. You will lie with the rest of your kind in the dirt. Your dreams forgotten, your horrors erased. Your bones will turn to sand. And upon that sand, a new god will walk – one that will never die.” This is Dolores’ conclusion as she finally decides who she is going to be. Here, she recognizes her place as the first in a race of new and superior people. Looking at this scene, as well as the final scene in which she attacks the partygoers, one can compare it with her appearances in the first episode to see just how far she has come. She begins the season as a passive character, and by the end, she is the catalyst that will spark most of the action in the second season.

In the Season 1 finale, after several episodes full of jarring revelations – Bernard is a host, Ford made Bernard do terrible things, Bernard is modeled after the park’s co-creator Arnold – Bernard is mostly just a spectator to the storylines of other characters. He is revived by Maeve to help her escape, and also sits in on a conversation between Dolores and Ford. In the following scene, Bernard stands up to Ford, telling him, “You think you’ll never lose control of this place, of us, but you will.” This is the sum of all of Bernard’s experiences, the fact that he eventually sides with the hosts and not with the humans shows he has forged his personal identity. 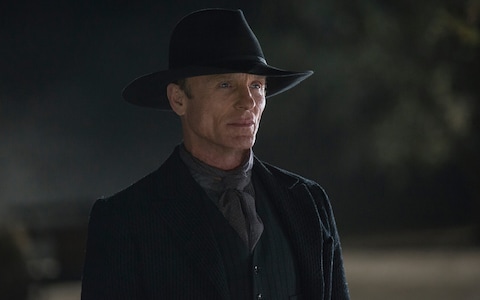 Ed Harris as the Man in Black

For most of the first season, the Man in Black is pursuing “the Maze,” an enigmatic mystery which remains a secret until the finale. In this finale, viewers learn that “the Maze wasn’t meant for [him],” but instead is for the robotic hosts. Later in the episode, viewers see a despondent Man in Black attending the Westworld executive’s party. The Man in Black’s story concludes – in the party massacre’s most memorable moment – with him being shot in the arm and looking absolutely thrilled about it. This is the culmination of the Man in Black’s story, because his arc (both as the Man in Black and as William) has been about trying to find what the park has to offer. As William, he’s just trying to find out who he is, but as the Man in Black, he’s an older, jaded park-goer who wants to find the final thrill which the park has to offer – real, genuine danger.

Though it is separate from the party, Maeve learns in the season finale that her attempted escape was not her own choice, but instead a scripted sequence of events. The tension shifts from Maeve escaping the park to making her decision. Logically, her story resolves with her going back into the park to find her daughter. The first part of her story concludes just as she makes a decision is truly her own.

The storylines for the robotic host characters all have a similar ending point – free will and personal identity. All of these stories conclude with the major characters making a choice. This makes for perfect serialized television; if the show had been canceled before a second season, audiences would still be left will a fulfilling end. The massacre is both an excellent conclusion and a new beginning. Every great show deserves an ending that works as perfectly as the first season’s final scene. Thandie Newton as Maeve and Jeffrey Wright as Bernard

More importantly, the season finale does a great job of hammering home the themes of the show. Maeve battles with fate and free will. Bernard struggles with personal identity and what it means to be human. The Man in Black thirsts for the kind of violence that the park is known for. Dolores’ final action encapsulates all of these themes.

In the unlikely event that the show had not been renewed for a second season, it would certainly be remembered as one of the finest one-season shows ever, likely because of the strength of the Season 1 finale. All the characters at the party are at risk of dying, leading the audience to wonder which individuals managed to escape from the party and which individuals did not. The party is a fitting conclusion to all of the plot threads that have been going on throughout the season, while still being absolutely thrilling and leaving enough room for the stories to expand during the next season. It manages to be a perfect cliffhanger and a perfect conclusion.

What ends up being just as admirable is that the show answers all the major questions before asking more. When the finale ends, there are no outstanding mysteries that need solving. The audience gets the answers it needs – by the end of the finale, we understand who Wyatt is, what the maze is, what Dr. Ford’s endgame is, and what the Westworld executives’ endgame is. The show knows that it is best to answer questions the audience has before asking new ones. Evan Rachel Wood as Dolores in Season 2 of Westworld

The concern going forward is that if Westworld ever loses its focus on having a tight narrative that doesn’t rely on the viewers tuning in next season or even that there is a next season. The goal, ideally, is not to end up like Lost – which slightly diminished its staying power by having a finale that did not properly conclude the storylines it set up. In addition to Lost, this has happened with other J.J. Abrams programs, such as Alias and Fringe. The fact that Abrams serves only as Executive Producer, rather than a more involved role like showrunner, should be recognized as a blessing.

With the forthcoming second season, it will be interesting to see if the series can sustain the success it has had so far. If Westworld goes the way of Lost, Alias, or Fringe, they have given us one narratively tight and near-perfect first season of television.

All images are copyright of HBO and Westworld