We seeded all 128 FBS teams and used WhatIfSports.com to sim them because football is better than basketball. Round one here. Round two here. Round three here.

But not Western Kentucky.

Lest we forget, the Hilltoppers visited the top-ranked Tide in September. After a lackadaisical first half, Alabama pulled away for a 38-10 win. Here in March, Nick Saban‘s squad once again turned in a lazy performance, and Big Red made them pay.

Mike White completed 38-of-50 passes, but the running backs stole the show, scoring all three of the Hilltoppers’ touchdowns as WKU grabbed a 14-0 lead and never relinquished it en route to a 27-20 victory in Tuscaloosa.

Who else will join the Hilltoppers in the Elite Eight? 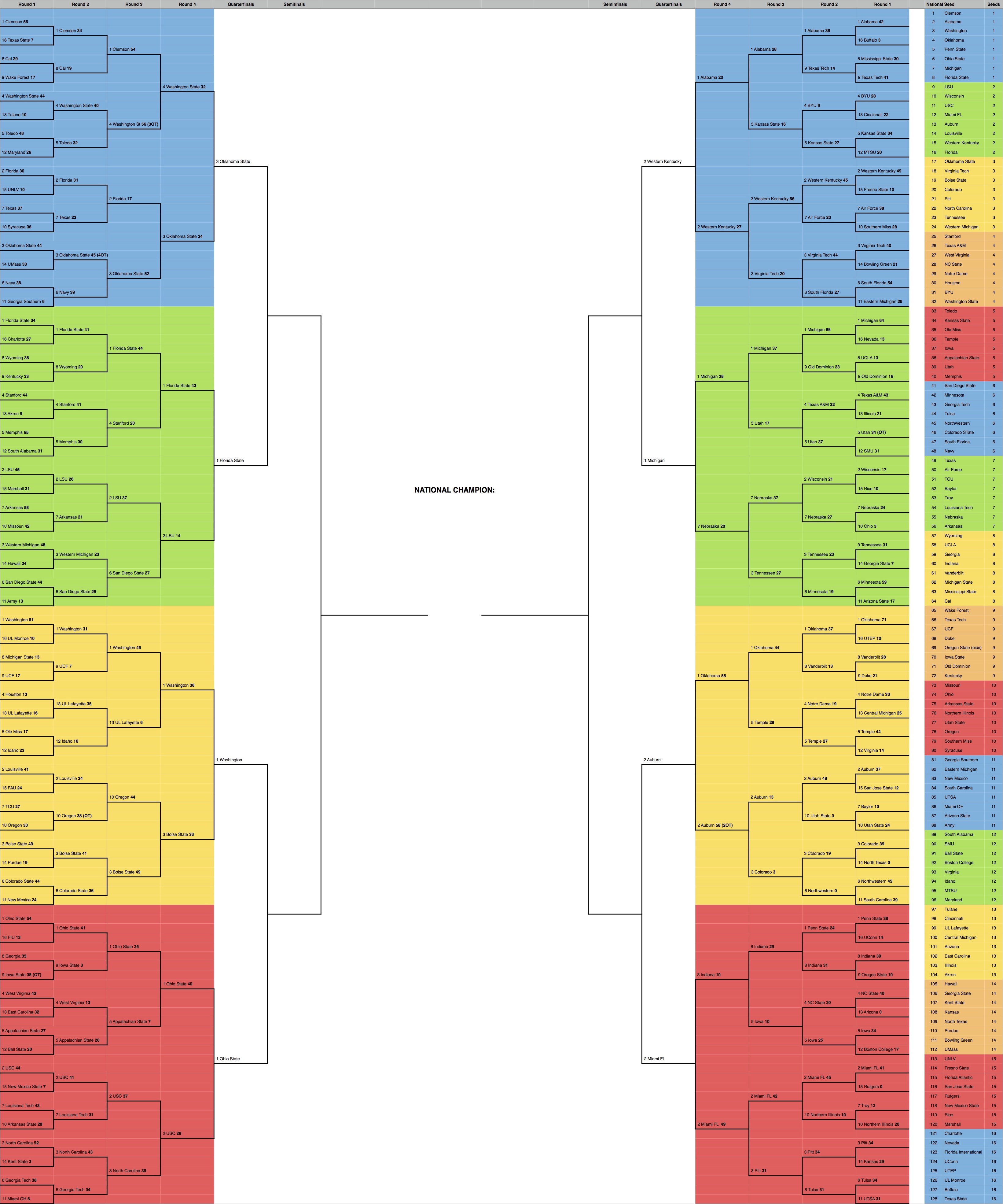 The Cowboys took a 28-10 lead into halftime but a furious rally saw Mike Leach‘s team with a 32-28 lead. Mason Rudolph found Jalen McCleskey for a hail mary touchdown to steal the win back.

Though Myles Gaskin and Lavon Coleman combined for 275 yards on the ground, it was quarterback Jake Browning who threw for all five Husky touchdowns.

The two teams were deadlocked at 26 headed into the final quarter before two Mike Weber touchdowns sealed the result for the Buckeyes.

My beloved Cornhuskers crashed back to earth after their surprising run. The Blackshirt secondary stifled the Wolverines’ passing game but the maize and blue running backs combined for 318 yards.

In January’s Sugar Bowl, an injury-riddled Tiger squad got mowed down by the Sooner offense . . . but this time Auburn was healthy. The Tigers overcame a 35-17 halftime deficit thanks to Kamryn Pettway and Kerryon Johnson combining for 298 yards and all six of Auburn’s second half touchdowns.

The Hoosiers finally ran out of gas after beating Penn State and Iowa. Brad Kaaya threw for five touchdowns.

(This is the final round where the higher overall seed hosts. The Final Four will be played at neutral sites.)

3 Oklahoma State at 1 Florida State: both of these squads look stronger than the two that dueled to a 37-31 Seminole victory in 2014.

1 Ohio State at 1 Washington: Washington has made it this far without facing any Power Five competition. Can Ohio State catch them napping?

2 Western Kentucky at 1 Michigan: the Hilltoppers survived Bryant-Denny, now they get their shot at the Big House.

2 Auburn at 2 Miami: neither team has hurt for offense, averaging 39 and 44 points in this tournament.

Check back later on in the week for the results!