We seeded all 128 FBS teams and used WhatIfSports.com to sim them because football is better than basketball. Round one here. Round two here. Round three here. Sweet Sixteen here. Elite Eight here.

The day is finally here, friends: we’re down to four teams, and either Auburn, Ohio State, Oklahoma State, or Auburn will be crowned FBS Madness Champion.

Auburn made it this far by thrashing San Jose State and Utah State before winning a defensive struggle over Colorado 13-3. The Tigers then avenged their Sugar Bowl loss to Oklahoma with a 58-55 double overtime thriller and outlasted red-hot Miami. Running back Kamryn Pettway is making a strong case for tournament MVP, racking up touchdown after touchdown.

Prior to the previous round Ohio State had barely broken a sweat in this tournament, with its defense turning in elite performances and the offense humming under new offensive coordinator Kevin Wilson. The Buckeyes cleared FIU, Iowa State, Appalachian State and thanks to two grinding fourth quarter touchdown drives, left USC in the Sweet Sixteen. And while the offense struggled mightily against Washington the defense did its part and got the Buckeyes through to the Final Four.

Oklahoma State looked completely the part of a Big 12 team early on, with the defense barely putting up fights in wins over UMass and Navy before things clicked. With the mulletted Mike Gundy at the helm the Cowboys blasted two-seed Florida 52-17 then escaped a Washington State team which had previously knocked off top overall seed Clemson, then went to Tallahassee and handed Florida State a 41-24 beating.

Lastly Western Kentucky, the Cinderellas of the tournament, came into the latter rounds red hot after thrashings of Southern Miss, Air Force, and Virginia Tech. The Hilltoppers then handed in two huge upsets, taking down Alabama and Michigan at their respective houses.

So with two rounds to play, today we will crown a champion. While we are still using WhatIfSports.com for our simulations, for this round the simulations will move to neutral sites while previously the higher-seeded team hosted.

Things looked sunny for the Cowboys as three Mason Rudolph touchdown passes gave the Pokes an early lead. But an Ohio State touchdown and subsequent safety just before the half breathed life back into the Buckeyes, which didn’t allow another point. With four minutes to play, J.T. Barrett found Parris Campbell for a ten-yard touchdown which proved to be the game winner.

The clock finally struck midnight for our oddly-shaped red Cinderella. Pettway carried for 189 yards and two backbreaking third quarter touchdowns to seal the result for the Tigers. A brief fourth quarter comeback bid was promptly snuffed out when Hilltopper quarterback Mike White left the game with an injury.

THE FINAL: OHIO STATE VS. AUBURN

Ohio State jumped out to an early 14-0 lead. Curtis Samuel scored a four-yard touchdown run on the Buckeyes’ first possession and a few minutes later Barrett found Campbell for a 14-yard score.

The Tigers would come back, however, on two second quarter Sean White touchdown passes, the first to Pettway and the second a 33-yard strike to Tony Stevens to tie the game. But Ohio State, which had managed some late-half magic prior in this tournament, saw Mike Weber break off a long touchdown run to put the Buckeyes back in front 21-14 with 19 seconds to go before the break.

After the half the Buckeyes extended the lead to 28-14 and then 31-14 in the third quarter on Noah Brown touchdown and a Tyler Durbin field goal as the Auburn offense briefly disappeared.

But not one to let his team fade, Pettway ripped off a 79-yard score to open the fourth quarter to bring the Tigers within ten. The Buckeyes responded with another Durbin field goal to extend their lead to 34-21, leaving the Tigers in do-or-die mode with ten minutes to play.

And Auburn darn near almost did: White found Marcus Davis for a 38-yard touchdown with 1:12 left to bring the score to 34-28 . . . but that was all she wrote. The Tigers’ subsequent onside kick attempt was unsuccessful, leaving the Buckeyes with the lead and the ball. Ohio State ran out the clock. 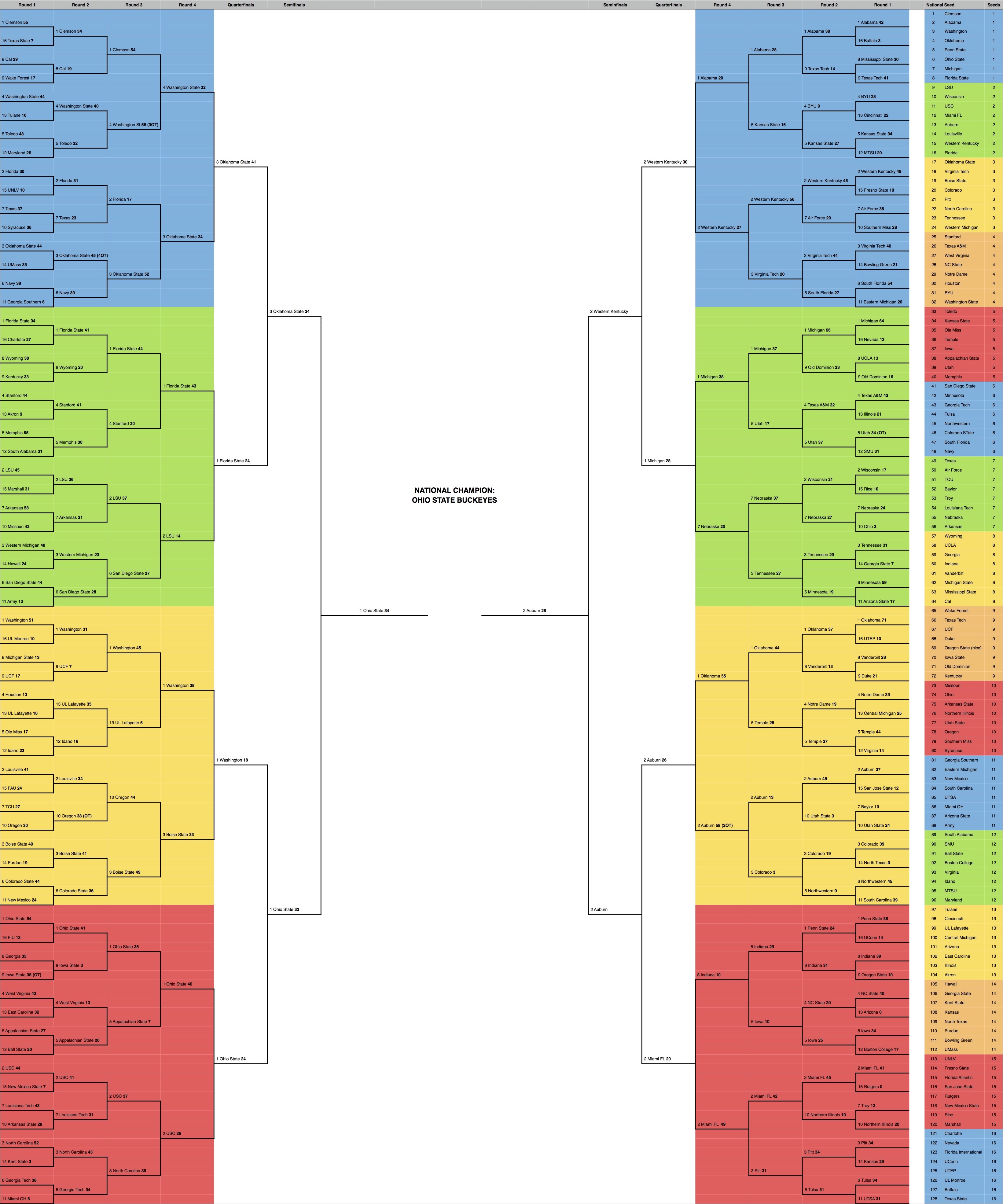