Below I will highlight a few guys that I perceive will provide value for their price on DraftKings for Week 5 in the NFL.

Aaron Rodgers, Green Bay Packers ($7,900): If you want to spend up on QB this week, Rodgers is the play at home against the Rams. We have been over this before, but we will go over it again. Rodgers is unworldly at Lambeau Field. Since the beginning of the 2014 season, Rodgers is averaging 292 passing yards, and 3.2 passing touchdowns in 10 home games. He is the play if you are paying up for QB and great for 50/50 or cash games.

Matt Ryan, Atlanta Falcons ($6,700): Matt Ryan is the 8th highest priced QB despite his consistent 19.3 fantasy points per game. He has a great matchup this week at home against Washington, who have shown a vulnerability to the pass after giving up 549 passing yards and 5 touchdown passes the last two week to Eli Manning and Sam Bradford. The Falcons should lean more on the pass this week with the good Washington front seven holding offenses to 78 rushing yards a game, second best in the NFL. Ryan makes for a great play in both 50/50 cash games, as well as GPPs.

Justin Forsett, Baltimore Ravens ($5,800): Forsett reminded everyone last week why he was so highly regarded before the season with 27 rushes for 150 yards against the Steelers. I am expecting similar production again this week against the poor Cleveland run defense. The Browns have given up the second most rushing yards a game this season of any team in the NFL at 141.5 yards per game and the third worst yards per rush attempt with 4.9 yards per carry. Start Forsett with confidence.

Dion Lewis, New England Patriots ($4,800): Lewis has showcased himself as the top running back on the Patriots. In the two games Blount has played after returning from suspension, Lewis has been on the field for 66% of the Patriots snaps and has at least 13 touches and a touchdown in each game. Remember, DraftKings uses point per reception scoring, making Lewis a great play with his 15 receptions over the first 3 games. With his minimum of 16 fantasy points each week, Lewis is a steal at his $4,800 price tag.

T.J. Yeldon, Jacksonville Jaguars ($4,400): Yeldon brings a ton of value as the 28th highest priced running back this week. Yeldon has solidified his role as the top back in Jacksonville with 65 touches over the last 3 weeks. He also gets to face Tampa Bay who has given up the 3rd most rushing yards per game so far this season at 136.8 yards. In what should be a close contest, I expect Yeldon to put up similar numbers as he did last week against the Colts: 22 rushes for 105 yards. Take advantage of Yeldon’s cheap price and elite matchup against the Buccaneers. 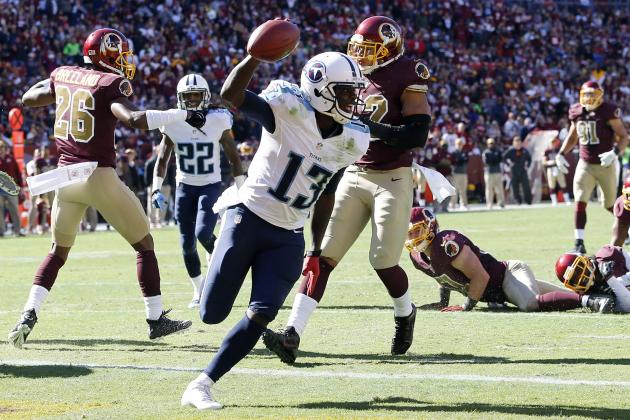 Julio Jones, Atlanta Falcons ($9,200): Jones has been an absolute monster this season. Jones is getting a crazy 38% of Matt Ryan’s targets and lighting the world on fire averaging 9.5 catches and 119.5 yards a game. As I mentioned in Matt Ryan’s section, the Falcons have a great matchup against the banged up Washington secondary. Washington has given up 549 passing yards and 5 touchdown passes the last two week to Eli Manning and Sam Bradford. Matt Ryan and Julio Jones should excel against Washington and make for a great stack. Pay up for Julio Jones.

Kendall Wright, Tennessee Titans ($5,400): Wight has been targeted on a team leading 21% of Mariota’s passes and is averaging 4.67 receptions and 71 yards on 7 targets a game. His opponent, the Bills, have been attacked heavily through the air with offenses throwing on 72% of their plays against the Bills (highest in the league). I expect the Titans to go with a similar strategy and showcase Wright in the slot for quick, easy throws.

Delanie Walker, Tennessee Titans ($3,800): Walker has averaged 13.5 fantasy points in his two games this season and gobbled up 20% of Marcus Mariota’s targets over that span. Like I mentioned in Kendall Wright’s section, the Bills, are attacked through the air. They have also given up 60.5 yards per game to tight ends so far this season. Walker makes for a nice tight end play, as well as a cheaper flex option. Start Walker with confidence.

Richard Rodgers, Green Bay Packer ($2,900): Rodgers has increased in price to $2,900. That is still below the minimum $3,000 for any running back or wide receiver. Rodgers continues to be a phenomenal GPP upside play at his low price. He had his best game of the season last week hauling in 5 passes for 45 yards and a touchdown on 6 targets. He has scored 13+ fantasy points in 2 of the 4 games and continues to see more action every week on a high-powered offense. Rodgers continues to play more snaps each week jumping up to 90% of the snaps last week. Play him while he is still so cheap.