Below I will highlight a few guys that I perceive will provide value for their price on DraftKings for Week 2 in the NFL.

Aaron Rodgers, Green Bay Packers ($8,000): If you want to spend up on QB this week, Rodgers is the play at home against the Chiefs. The Chiefs are a good defense, but Rodgers just carved up the Seahawks for an efficient 249 yards, and 2 touchdowns to go along with 23 rushing yards. Since the beginning of the 2014 season, Rodgers is averaging 287 passing yards, and 3 passing touchdowns in home games. He is the play if you are paying up for QB and great for 50/50 or cash games.

Carson Palmer, Arizona Cardinals ($6,600): I wrote up Palmer last week and I am going to do it again. He has a great matchup this week at home against the 49ers, who just gave up 369 passing yards to the Steelers last week. Palmer has been an elite fantasy QB while he has been healthy the last 2 seasons. In his 8 healthy games, he has thrown for an average of 265 yards and 2.25 passing touchdowns per game. The 49ers have allowed the most yards per attempt of any defense so far this season, allowing 10.2 yards per throw. Palmer makes for a great play in both 50/50 cash games, as well as GPPs.

Joseph Randle, Dallas Cowboys ($5,100): Randle has shown steady production so far this season with at least 16 carries each game. Now with the loss of Tony Romo, the Cowboys should lean heavily on their run and their elite offensive line. Randle should receive a high volume of carries and provide production against the Falcons who have allowed 3.7 yards per carries so far this season.

Danny Woodhead, San Diego Chargers ($4,400): Minnesota has allowed the 3rd worst yards per rush so far this season at 4.9 yards a pop. In addition, Woodhead has received all 7 red zone rushes this season for the Chargers, in addition to gobbling up 19% of the team’s targets. In a point per reception scoring that DraftKings uses, Woodhead makes a great play at his price with his 14.5 touches per game.

Jeremy Maclin, Kansas City Chiefs ($6,000): The Chiefs should throw a lot this week on Monday night, as I expect them to be down against the Packers. Maclin has received a team leading 26.79% of the targets from Alex Smith including 3 red zone targets in 2 weeks. I see Maclin having a nice day and getting in the end zone.

John Brown, Arizona Cardinals ($5,100): As I mentioned last week, in games John Brown has played with Carson Palmer over the last two seasons, Brown has averaged 3.6 receptions & 50.8 yards and 4 touchdowns in 8 games. He has also averaged 6.5 targets per game over that span. Despite the big week from Fitzgerald last week, Brown has only one less target this season and the same amount of red zone targets. Like I wrote with Palmer above, look for Brown to have a good week against the 49ers who just gave up 369 passing yards to the Steelers.

Kendall Wright, Tennessee Titans ($5,000): Wright leads the Titans with 10 targets and has a great matchup against the Colts secondary. The Colts have shown a vulnerability to slot receivers this year as shown by Eric Decker catching 8 of 11 targets for 97 yards and a touchdown before departing with an injury last Monday. I foresee a big game for Wright that makes him a bargain at his $5,000 price tag.

Stevie Johnson, San Diego Chargers ($4,300): Antonio Gates is still suspended for 2 more games and back up tight end Ladarius Green is likely out with a concussion. Johnson has received 19% of Rivers targets this season and that will bump up with the loss of Green and his 18% of the targets up for grabs. You could do a lot worse with $4,300. 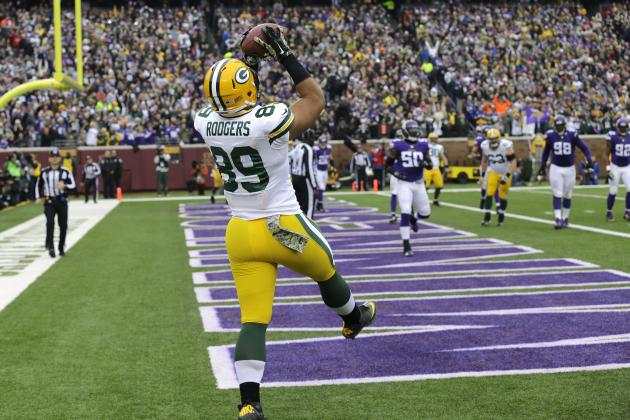 Kyle Rudolph, Minnesota Vikings ($3,300): Rudolph has been very consistent his first two games with a minimum of 5 receptions and 30 yards each game. His 14 targets and 10 receptions both lead the Vikings. In addition, he has received 3 of the 7 red zone targets for the team. He also gets a nice matchup against the Chargers who have given up at least 49 yards and a touchdown per game to opposing tight ends. Rudolph makes for a great cash-game value at his price.

Richard Rodgers, Green Bay Packer ($2,500): I will continue to write up Rodgers here until his price goes up. He continues to be a phenomenal GPP upside play at his minimum price. He has at least 3 catches each week and last week caught a touchdown pass, as well as a two-point conversion against the Seattle defense. Look for Rodgers to emerge as go to red zone target for the elite Packers offense. Play him while he is still so cheap.