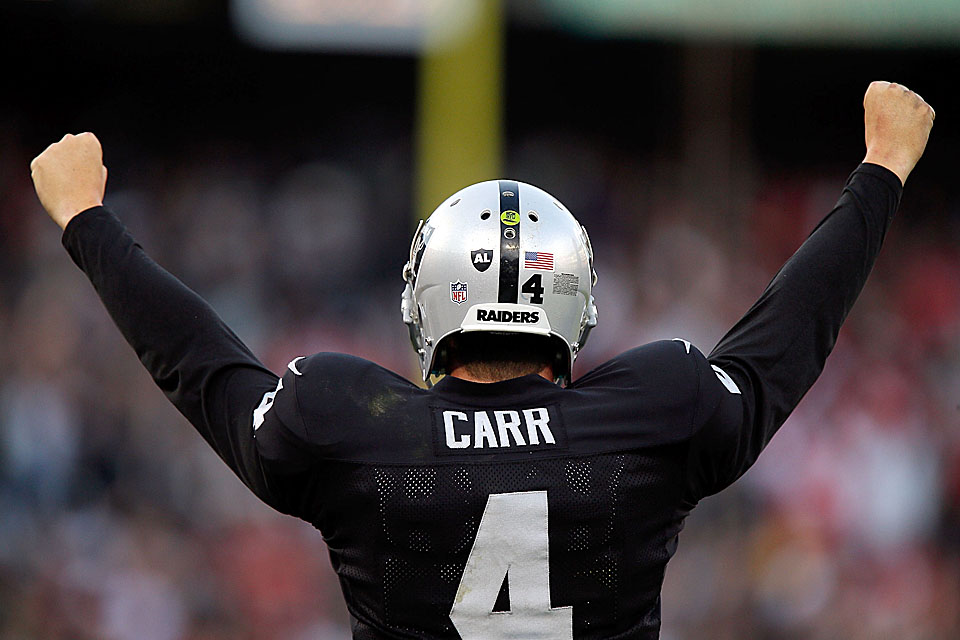 Below I will highlight a few guys that I perceive will provide value for their price on DraftKings for Week 10 in the NFL.

Aaron Rodgers, Green Bay Packers ($7,500): If you want to spend up on QB this week, Rodgers is the play at home against the Lions. We have been over this before, but we will go over it again. Rodgers is unworldly at Lambeau Field. Since the beginning of the 2014 season, Rodgers is averaging 284 passing yards, and 3 passing touchdowns in 12 home games. He also gets a great matchup this week against the Lions 30th ranked pass defense. He is the play if you are paying up for QB and great for 50/50 or cash games.

Derek Carr, Oakland Raiders ($5,800): If you would like a cheaper quarterback option, Carr is the guy. He has been outstanding the last 2 weeks putting up 30+ fantasy points a game. In those games he has faced the 6th and 13th ranked pass defenses in the Jets and Steelers according to Football Outsiders. He should do even better this week against the mediocre 15th ranked Vikings pass defense. He may simply be too cheap to pass up with his potential.

DeAngelo Williams, Pittsburgh Steelers ($6,500): Williams has been fantastic in the 3 games he has started this year. He has averaged 30 fantasy points a game in his 3 starts and his worst game of the three he put up 17.2 points. Double-check that he is healthy and a go, but as long as he is active he will be a great play against the terrible Cleveland rush defense. Cleveland is giving up a league worst 147 rushing yards a game as well as a 29th ranked 4.7 yards per carry. Use Williams.

T.J. Yeldon, Jacksonville Jaguars ($4,800): Yeldon is a perfect 50/50 play this season with a solid 17.2 fantasy points per game his last four games. Most importantly is his volume. Yeldon is averaging 19.5 touches the last four games and is a true three-down back playing over 85% of the snaps for the Jaguars in the last two games. Yeldon also has a minimum of 9.7 points in 6 of his 7 games played and that is with only 2 touchdowns this season. The Jaguars have rumored that Yeldon will start to get the goal line carries and that should increase his points. Yeldon also has a decent matchup against the Ravens 14th ranked rush defense. Fire him up!

Allen Robinson, Jacksonville Jaguars ($6,700): Let’s fire up Robinson this week. Robinson has had an exceptional season with a 19.1 fantasy points per game, good for 7th most of all wide receivers. Yet he is still the 14th highest priced wide receiver. Robinson also is 12th in the league with an elite 10.25 targets per game. The Jaguars and Robinson also get a nice matchup this week against the 28th ranked Baltimore secondary.

Michael Crabtree, Oakland Raiders ($5,800): Crabtree is a great cost effective stack with Carr. He has been phenomenal this season and is still only $5,800. Crabtree remains to be great for his price as he has the 12th most fantasy points per game for wide receivers and is the 18th highest price wide receiver. At such a cheap price, Crabtree is a great play this week and allows you to fit more expensive players onto your team.

Davante Adams, Green Bay Packers ($4,200): Simply put, he is too cheap for a guy that is always on the field (97% of snaps last week) with Aaron Rodgers and is facing the 30th ranked pass defense. And oh by the way, he saw 11 targets last game. Do you need any more reasons to use him?

Brandon LaFell, New England Patriots ($4,100): Same logic as Adams. LaFell has Tom Brady throwing to him and is on the field more than 75% of the Patriots offensive snaps. In addition, the Patriots opponent this week is the 26th ranked Giants pass defense. Lastly, in the three games he has played he is averaging 8 targets a game. That is great for his low price.

Zach Ertz, Philadelphia Eagles ($3,000): Ertz has been very good of late, averaging 10 fantasy points per game over the last four games with 19 receptions for 210 yards on 28 targets during that span. Now, despite those good numbers Ertz has yet to reach the end zone this season. The reason Ertz’s value has dropped to the minimum is due to his lack of touchdowns this season. Ertz has been unlucky in this regard, but his luck should turn around as he is second on the Eagles in red zone targets. Ertz makes for a nice tight end play, as well as a cheaper flex option.