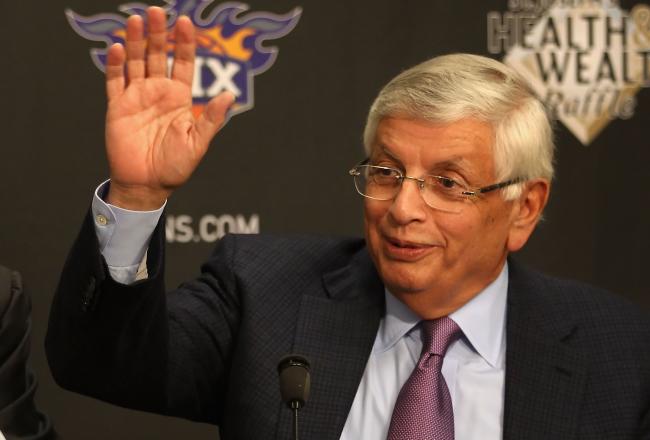 According to NBA.com, commissioner David Stern will retire February 1, 2014. He will have served the post for exactly 30 years. The Board of Governors has accepted his suggestion of deputy commissioner Adam Silver to replace him. They will have an official vote in April.

“I feel great,” Stern said. “I’m stepping down. I’m not retiring. I will enjoy watching it. Not in any official [capacity]. Comfortably away someplace else. On call to help.”

While 2014 is a long way off, Stern has defined and refined the NBA on multiple occasions. Some memorable moments in his career include: Why aren’t these available on NBA.com?

1984 Draft: One of the greatest drafts in NBA history. Future Hall of Famers Hakeem Olajuwan, Michael Jordan, Charles Barkley and John Stockton were all drafted. (Olympic gold medalist Carl Lewis was also drafted my Chicago in the 10th round but did not attempy to join the league.)

The Lottery of 1985: While often controversial (even in the first year), the lottery gave all non-playoff teams a shot at the first pick in the draft. The New York Knicks were able to bring their franchise back to relevance by drafting Patrick Ewing first overall. He was joined by Chris Mullin, Karl Malone, Joe Dumars and Arvydas Sabonis as Hall of Famers from that years draft.

Future lotteries saw the Orlando Magic build one of the most exciting franchises in the league -able to fill the first Jordan gap- by winning the consecutive lotteries (they won it a third time, which re-built their team a decade after the first double-lottery victory). LeBron James staying in his home state was the result of Cleveland winning the lottery, and the Chicago Bulls were able to do the same thing with their hometown hero, Derrick Rose. The San Antonio Spurs were able to win four championships after winning the rights to draft Tim Duncan first overall, 10 years after drafting David Robinson first overall.

The best Stern draft moment ever. Only one more draft left.
(diehardsports.com)

Drug/Culture Cleanup: Stern inherited a tough drug culture that cost many talented players Hall of Fame careers and put drugs on center stage in mainstream America with the death of Len Bias. Stern helped lead the way to cleanup the culture of the NBA and would constantly work to reform negative culture in the NBA, including installing a dress code.

All Star Weekend: The festivities blossomed under Stern, especially due to the epic slam dunk duels between Jordan and Dominique Wilkins.

Expansion: With the league at a high in popularity, Stern oversaw the Charlotte Hornets and Miami Heat join the league in 1988, the Orlando Magic and Minnesota Timberwolves in 1989, Canadian expansion in 1995 (see below) and a replacement Charlotte team in 2004. That’s seven teams in 17 years, increasing the league from 23 to 30 teams.

Marketing the stars: The NBA took over as the most marketable league. Players like Magic Johnson, Larry Bird, Larry Johnson and countless others gained lucrative contracts to be the face of brands in the late 80s-90s. This would be lead by Michael Jordan who became his own global brand and the most recognizable athlete worldwide. (He would become so successful as a brand, that he would be able to buy his own team.) That lead to …

The Dream Team:With the global passion centering on a few American stars, Stern was able to usher NBA players into the Olympics. This not only put the US back on the map but would build the global game, one that would build the NBA for decades to come.

Stern oversaw the globalization of the NBA

Canadian Expansion: Three years after those Olympics, both Vancouver and Toronto were granted expansion teams. While the Grizzlies didn’t catch on (in great part due to missed draft opportunities) and relocated to Memphis, the Toronto Raptors have had a good presence in the league and have had many stars come through their franchise leading to a devout following.

International Expansion: Air Canada for the US with the “Dunk of Death” on France

The WNBA: Just prior to the 1996 Summer Olympics, Stern announced the formation of the WNBA, a women’s professional basketball league in the United States. It would run spring to fall and would play in NBA cities. (There are now three teams in cities without NBA franchises.) At the time, the American Basketball League was starting up (it began play a few months prior to the WNBA), but it would not make it through three seasons.

Tim Donaghy and ongoing officiating controversies: In 2007, NBA referee Tim Donaghy resigned from the NBA and would eventually plead guilty to game fixing allegations. This was arguably the worst sports gambling controversy as it involved a representative of the lead changing the outcome of a game, not a player or manager. This also opened the gates for the questioning of other officials, especially Joey Crawford for the way he officiated playoff games of the San Antonio Spurs.

The NBDL: In 2001, the NBA announced the creation of a “farm system” the National Basketball Developmental League.

Why didn’t this work?

The Veto: Just prior to the 2011-12 season finally getting underway, Stern vetoed a blockbuster trade involving the Houston Rockets, Los Angeles Lakers and the league-owned New Orleans Hornets that would send the Hornets’ best asset, Chris Paul, to the Lakers. This was met with great controversy throughout the media and the league. A few days later, he accepted a trade that sent Paul to Los Angeles, albeit in a Clippers uniform.