We seeded all 128 FBS teams and used WhatIfSports.com to sim them because football is better than basketball. Round one here. Round two here.

It finally happened, you guys: madness has struck, the sword has been swung, and Clemson, the top overall seed and defending national champion, has fallen.

In a thrilling three-overtime contest, four-seed Washington State upset Clemson 56-54. Midway through the third quarter the Tigers held a 27-10 advantage before Luke Falk led the Cougs on a 24-7 run to tie the game, with the overtime-forcing score coming with just 0:02 left on the clock. The teams traded touchdowns for two overtimes before the Tigers failed to convert a two-point try, leaving the door open for Wazzu to win the game . . . and Wazzu capitalized. 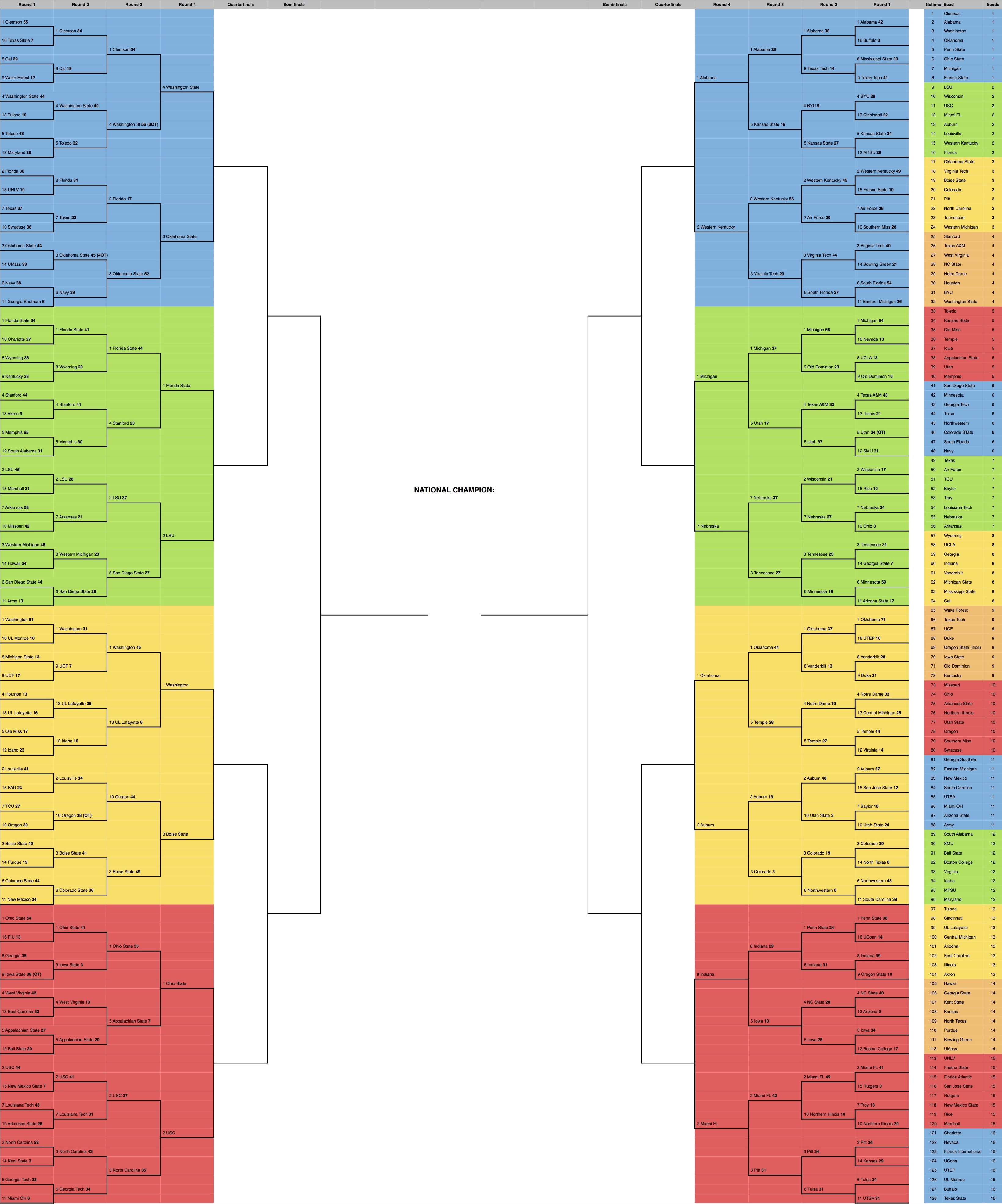 Ohio State routed Appalachian State 35-7 on 165 yards and three scores from Curtis Samuel on just eleven carries, and Jim Harbaugh cruised to avenge his first career loss at Michigan with a 37-17 victory over Utah.

Miami traded punches with Pitt for three quarters before pulling away. Alabama suffocated Kansas State which reached the red zone three times in the second quarter and settled for three field goals in the most believable result thus far.

My pet Group of Five teams, Western Kentucky and Temple, both managed to advance this far and toppled some quality competition to do it.

Temple’s run unfortunately came to an end. Aided by some long scoring drives and a special teams touchdown, the Owls held a 28-24 advantage in the second quarter before Oklahoma rattled off 20 straight. Samaje Perine scored four touchdowns.

The Hilltoppers, however, continued to roll, blasting three-seed Virginia Tech 56-20. If they ever wanted Bama, they’ve got them next.

Well, Wazzu/Clemson certainly qualifies. Elsewhere Boise State ended Oregon‘s run with a  49-44 victory. (RIP, Oregon: you scored a lot of points, allowed a ton of points, and were fun as heck.)

Auburn and Colorado traded punches but the Tigers’ defense won the day, stifling the Buffaloes’ attack and adding a late score to win 13-3.

One Cinderella’s clock finally struck midnight: UL Lafayette‘s charmed run ended with a resounding thud, as the 13-seed Cajuns ran into Washington and lost 35-6 . . . but Nebraska, which avenged a regular season loss to Wisconsin in the second round, continued its revenge tour with a 37-27 upset of Music City Bowl opponent Tennessee. The seventh-seeded Cornhuskers will face Michigan in the Sweet Sixteen.

4 Washington State at 3 Oklahoma State: the Cowboys are red-hot after obliterating Florida 52-17, and the Cougars just toppled the defending national champion.

2 LSU at 1 Florida State: Leonard Fournette and Derrius Guice do battle with Dalvin Cook. This is fine.

3 Boise State at 1 Washington: Chris Petersen meets his former team. The Huskies, curiously, have yet to face a Power Five opponent in this tournament.

2 USC at 1 Ohio State: the Buckeyes have barely been challenged, and the Trojans’ defense has left a bit to be desired.

2 Western Kentucky at 1 Alabama: my large adult sons the Hilltoppers do battle against the highest-seeded remaining team.

7 Nebraska at 1 Michigan: Harbaugh faces his former coach and mentor as the Wolverines host the surprising Cornhuskers.

2 Auburn at 1 Oklahoma: these two teams will recall one another from the 2017 Sugar Bowl, wherein the Sooners ran all over an injury-depleted Tigers squad.