We seeded all 128 FBS teams and used WhatIfSports.com to sim them because football is better than basketball. Round one here.

Round one gave us a few upsets, namely lowly Idaho, Iowa State, and UCF squads going on the road to topple Ole Miss, Georgia, and Michigan State . . . but the top seeds were more or less safe. Save for Houston’s 16-13 stumble against Louisiana Lafayette, the top four seeds in every region comfortably advanced. 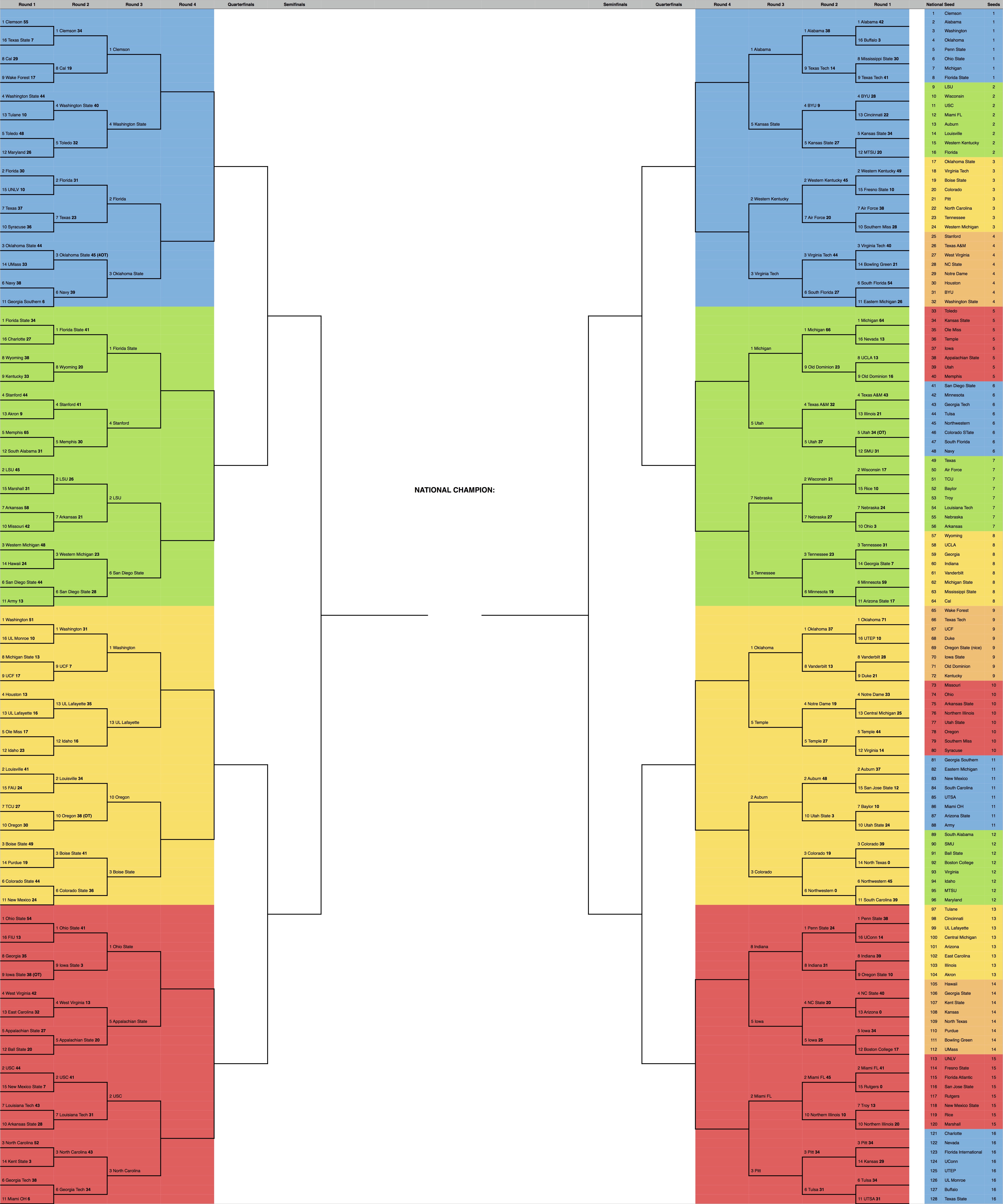 In the first post I mentioned two mid majors I thought might make some noise in this tournament: Western Kentucky and Temple. Of the two, the Hilltoppers have the decidedly easier path to the Final Four: they blasted Fresno State and Air Force. Temple, however, handled Virginia then went into South Bend to topple four-seed Notre Dame.

Elsewhere in the Florida State Region, San Diego State took down PJ Fleck-less Western Michigan 28-23 to set up a third round date with LSU.

And after Oklahoma State and Navy ground to a ho-hum regulation, things popped off in overtime as the Cowboys outlasted the Mids 45-39 after the fourth overtime.

Let’s check in on Idaho, Iowa State, Louisiana Lafayette, and UCF, our little engines that could from round one.

Idaho and ULL, unfortunately, ran up against one another, and the Vandals appeared not to have much left in the tank as the Cajuns rolled 35-16. Mark Hudspeth‘s 13th-seeded ULL squad becomes the lowest-seeded team to find the third round. They’ll visit Washington.

Let’s start in the Michigan Region, where seventh-seeded Nebraska went up to Camp Randall and upset second-seeded Wisconsin 27-21. (The Cornhuskers were denied in overtime against the Badgers in October.) Mike Riley‘s squad advances to the third round to meet Tennessee, which defeated Nebraska in the 2016 Music City Bowl.

Over in the Washington Region, Willie Taggart‘s new Oregon squad continues its strong showing. The Ducks exorcised Alamo Bowl demons against TCU in the first round to earn a date with a powerful Louisville squad . . . and took them down. The tenth-seeded Ducks overcame a fourth quarter deficit to eliminate the second-seeded Cards 38-34 in overtime.* They’ll visit third-seeded Boise State.

*The math on this doesn’t really make sense. @ WhatIfSports, not me.

Finally, ever-the-bridesmaid-never-the-bride Indiana took its eight seed into Happy Valley and knocked off one-seed Penn State 31-24. They will travel to Iowa, which upset NC State 25-20.

4 Stanford at 1 Florida State
6 San Diego State at 2 LSU
(It’s a shame Dalvin Cook declared for the draft because otherwise you’d have to admire this region’s commitment to running the dang ball.)

13 UL Lafayette at 1 Washington
10 Oregon at 3 Boise State
(PNW as heck, and also a team called the Rajin’ Cajuns.)

5 Appalachian State at 1 Ohio State
3 North Carolina at 2 USC
(The most stable region so far, but expecting chaos soon.)

5 Kansas State at 1 Alabama
3 Virginia Tech at 2 Western Kentucky
(Kansas State and Alabama are a match made in heaven. Good lord I want to watch that game IRL.)

5 Utah at 1 Michigan
7 Nebraska at 3 Tennessee
(Jim Harbaugh gets a shot at revenge against the Utah team that started him off 0-1 at Michigan.)

5 Temple at 1 Oklahoma
3 Colorado at 2 Auburn
(The mishmash of styles in this region is glorious.)

Check back later for the third round results.