We seeded all 128 FBS teams and used WhatIfSports.com to sim them because football is better than basketball. Round one here. Round two here. Round three here. Sweet Sixteen here.

Hello friends, it’s been a minute since we checked in on our 128-team bracket.  A quick refresher of our Elite Eight pairings:

Washington met UL Monroe, UCF, UL Lafayette, and Boise State en route to the Elite Eight. They will host Ohio State, which beat FIU, Iowa State, Appalachian State, and USC in four blowouts. The Buckeyes will be the Huskies’ first Power Five opponent in this tournament.

The tournament’s surprise team, Western Kentucky, has been firing on all cylinders, beating Fresno State, Air Force, and Virginia Tech by an average score of 50 to 17 before toppling its biggest prize, taking down Alabama 27-20. Now they’ll visit Michigan. The Wolverines have barely broken a sweat in this tournament, crushing Nevada and Old Dominion and comfortably handling Utah and Nebraska.

Auburn’s has turned in strong performances on both sides of the ball, leaning on offense to beat San Jose State and Utah State and suffocating Colorado with defense before outlasting Oklahoma in a double-overtime thriller. Miami has barely been tested, beating Rutgers, Northern Illinois, Pitt, and Rutgers.

Let’s narrow it down to four, shall we? 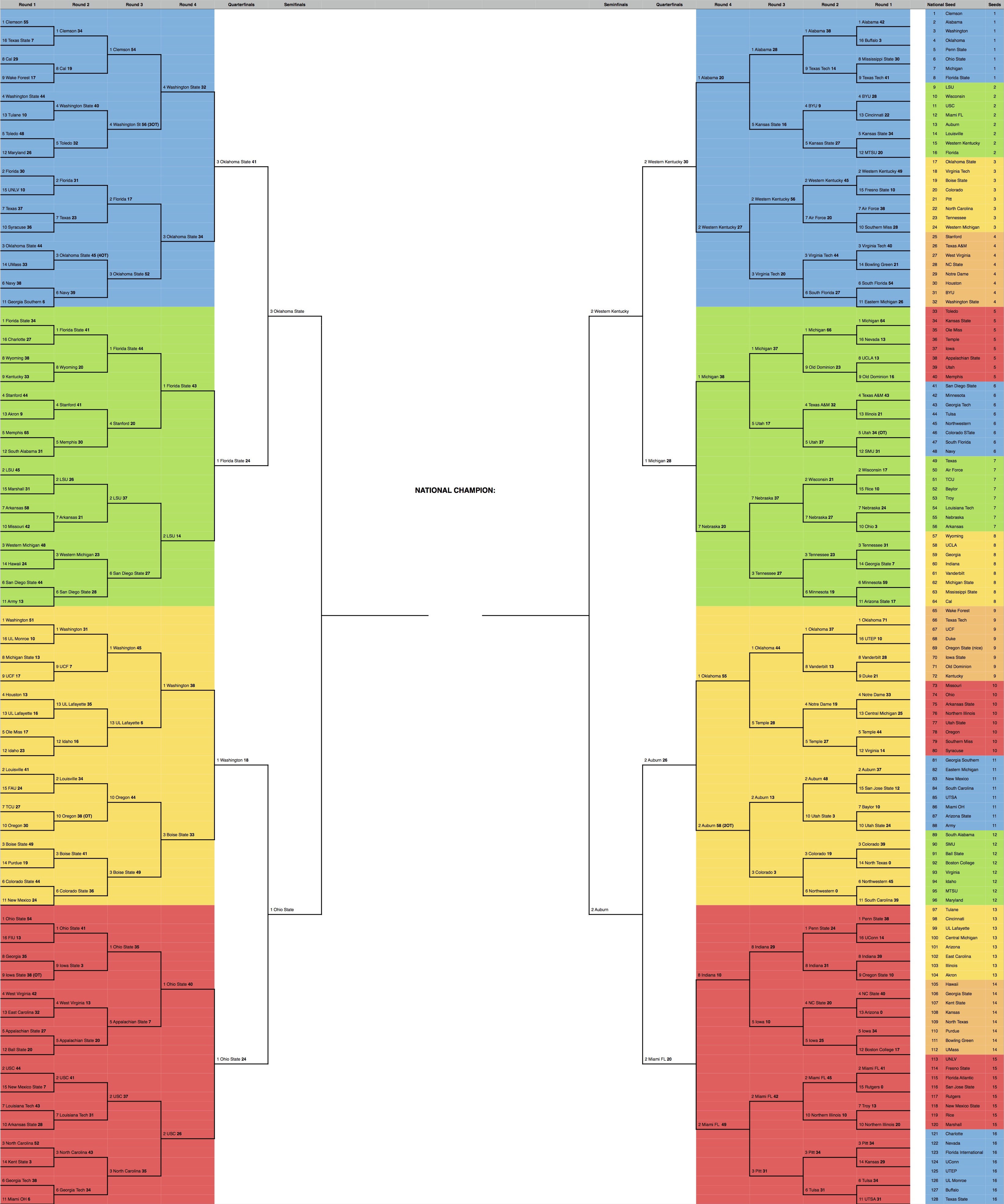 The fearless Pokes rolled into Tallahassee and did not give a single hoot about the stage, rolling through to the Final Four on Mason Rudolph‘s 29-of-33 passing day.

An ugly day for offense as the Buckeyes managed just 205 yards and the Huskies were forced to settle for six field goals. The Buckeyes will meet Oklahoma State.

Up in the Big House, Michigan dominated time of possession by almost twenty more minutes but the Hilltoppers made the most of their opportunities, as Mike White threw for 370 yards on just 20 attempts.

Brad Kaaya, who had been nearly flawless through four games, finally came down to earth with a three-pick day. The Tigers weren’t much better, settling for field goals four times, but it was enough.

With those games in the books our Final Four is set: Oklahoma State will meet Ohio State, and Western Kentucky will face Auburn. While all games up to this point have been hosted by the team with the higher overall seed, the Final Four and championship games will take place at neutral sites. Check back Friday!